Trying To Understand Why One Might Demonize Milton Friedman's Theories.

Milton Friedman's miniseries, "Free To Choose" in the late 60s put economics on the layman's radar and introduced the underlayment of forces behind out daily lives. I propose that there was healthy prosperity for decades before the dark forces of corruption hobbled and ultimately closely annihilated this fragile house of cards we call society. By the time any strategy has hit it's sunset region it's natural for finger pointing, since no one would have believed that such a brilliant beginning would end in "x"! 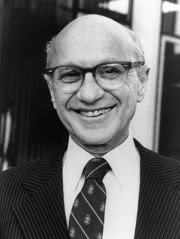 Every successful strategy has a logical core principle that has a limited horizon of effectivity. There is a bandwidth aspect, a delay factor of full implementation owing to critical mass components (the bell curve comes to mind) and interrelationships with other interactive theories and implementations; messy, to say the least, and intrinsically limited in timeline because the forces of human nature without clear leadership seek to corrupt rather than raise the bar as a desired ratchet "upwards" is sought for the good of society when leadership is effective. Unfortunately, the good of society struggles against dark forces intent on their own aggrandizement. So you see, I'm optimistic in a cynical, way. Good leadership instills pursuit towards a greater good, instilling a sense of duty to do the right thing, while bad leadership leaves the good thinking vulnerable to the greedy and self serving. Meet Wallstreet in a period of rudderless leadership; squabbling behind people's backs as they try to recover what they think they lost after the last bubble, because the path to a new bubble is ever building and written on a wall just beyond the horizon, since leadership is weak and lacking definition. Overzealous regulators don't help either. They are just added weight assuming business leader's brilliance is a given. How big is that faction that feels it needs to get before it's taken?

Good leadership would snap our society back into a healthy outlook much like a sail snaps full of wind when it's on a good heading. Harnessing the wind creates the value. The rest are just hanger's on.
Posted by jonp at 8:28 AM