Kickstarter.com gives start up businesses a chance:  In my humble opinion, the best chance ever offered in history.  This is a system for venture capital with built in accountability!  It's a dream come true for the dreamers among us.  Aw, come on, you know there's a dreamer in there somewhere.... The diversity of projects is extreme.
There are various musicians attempting to fund their recording studio gigs such as Lelia Broussard, a self proclaimed former waitress and french fry enthusiast, who, along the way became one of the runners up to" The Picture On The Cover Of The Rolling Stone Contest" earlier this year.  We were rooting for you, Lelia!

idrawcars is a very refined site created by some excellent designers in the midwest attempting to create a product for budding designers.  Personally I like their music picks.

Another project was Printrbot that successfully raised $800,000 for their redesign of a 3D printer!  What designer doesn't want a printer that makes solid plastic parts!  The amazing thing is, many parts of these machines can be built with other printers already completed!  In all fairness, there has been a worldwide consortium of  DIY (Do It Yourselfers) named reprap who have approached the process of building 3D printers from various perspectives.  Google's SketchUp can even be used as a solid model platform to interface with a computer.  Uh-oh.....I'm getting a little geeky; sorry about that!

Another is Versalette; a type of clothing design with exotic simplicity in mind.

Anyway, you get the picture.  I need to get back to the drawing board now.

See you next time!

Blast From The Past: Could Our President Be A Robbing Hood?

You notice how your sense of optimism may slip away when you least expect it....a slight irritation on the freeway may lead to noticing the dust on your dash and thoughts that you've been thinking of replacing your car, but money's a little tight right now and you won't mind, for the time being that your lifestyle seems to be sliding down a ravine! Cheer up! You're in good company! Everyone in The Western Civilization is going through the same thing. There seems to be an effort to systematically deconstruct our economy, the greatest in history and the kingpin throughout the free world! Hold on to your hats; We're in for a rough ride, but there could be a Robbing Hood (click the hyperlink to see my parody) robbing from the rich and giving (wink, wink, nod, nod) to the poor. Oh, and by the way, I keep flashing back to the various futures presented in "Back To The Future".
I wrote this parody in 2009 and decided to see how it was holding up after all this time. I know, I know it lacks polish, but I hope you'll forgive that aspect and just enjoy it. It was my first and I wanted the bar to be low enough so I could improve on the next one.
Posted by jonp at 9:07 AM No comments:

Golden Geese Are Hard To Come By

I’m far from the OWS element. Context is elemental in analyzing issues. 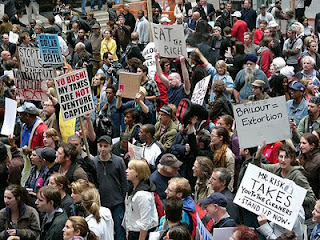 I know it’s in your face daily out there in NY. America has traditionally been the place where a person takes a stand and takes control of his/her emotions and future, so the beginning of protests can be exciting. Eventually they degenerate down into buying sleeping bags or equivalents because all organizations need structure and they don’t recognize the beauty of the Constitution, because it was written by “old timers”. The weirdest thing about the protest movements through the years is that the members are unaware of the romanticism associated with swaying back and forth; "We will overcome..." in their solidarity. That feeling of being a part of something bigger than one's self is intoxicating and what I call romanticism. It may be tough on the streets, but they feel they're fighting for a cause; so much more interesting than those mediocre lives where they're merely trying to stay ahead of their bills. Chaos serves the OWS crowd (Ann Coulter’s mob?) and I’m convinced it’s a perfect smokescreen for Obama looting the Golden Goose. Obama’s intelligence must be shallow since Golden Geese are hard to come by and if the USA engine of prosperity is decimated, how will Michelle be able to keep eating lobster? The homeless aren’t worried about the end of the world, because a leveler would serve them. That takes care of the bills, too
Posted by jonp at 10:09 AM No comments: